The European logistics market is in a state of flux. The coronavirus, e-commerce and investment pressure are creating a growing demand for logistics space and investment properties. If you want to keep track of developments at the European level, you need the right instrument. With its GARBE PYRAMID Map, GARBE Research presents a newly developed yield and rent map for the 123 leading logistics real estate markets in Europe.

The name PYRAMID stands for ‘Pan-European Yield and Rent Assessment Map In Detail’. In a nutshell, the GARBE PYRAMID Map offers updated, detailed and succinct information on prime rents and prime yields as well as their change dynamics for the year 2021. The map has a unique geographical overview and highlights GARBE Industrial Real Estate GmbH’s increasing pan-European focus. The GARBE PYRAMID will be regularly released at the start of the year. Key insights from the current GARBE PYRAMID can be found here. 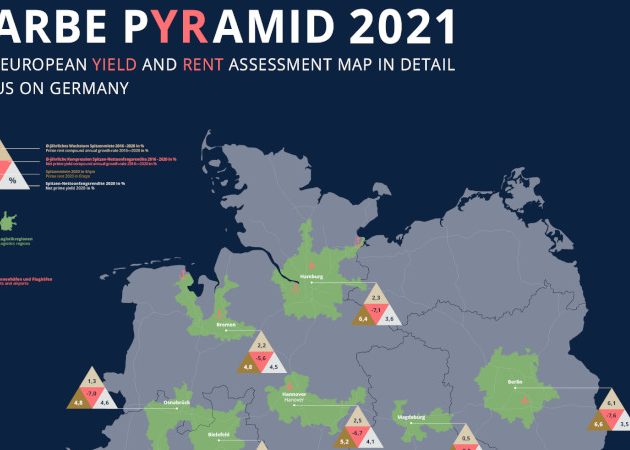 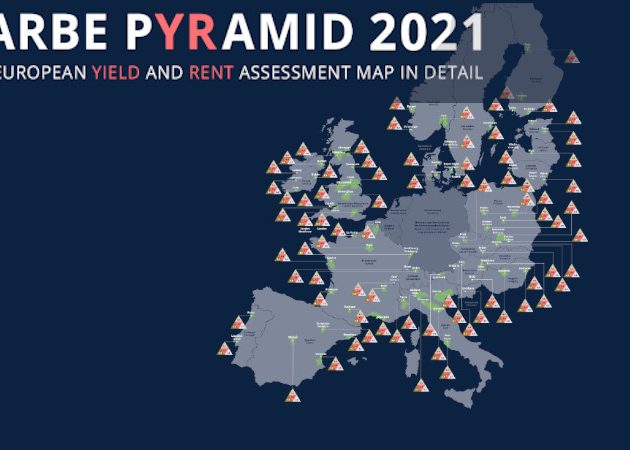 In comparison to the last five years, there has been a noticeable compression of yields all across Europe. Among all 123 logistics submarkets studied in Europe, the fastest compression of returns was identified in Magdeburg, with an average compression of returns of almost ten per cent. The main reason for this is that Magdeburg is geographically well positioned with plenty of land still available on site. Magdeburg also has moderate prices paired with abundant and affordable labour, which has made it even more attractive. Other cities that gained in significance as major European logistics markets and experienced a significant decline in prime yields despite the pandemic are Eindhoven in the Netherlands and Lyon in France.

Investment opportunities with high prime yields (and thus still favourable purchase prices) can still be found in Eastern European secondary markets in particular, mainly because of the affordable prices and expandable infrastructural requirements. Due to the rising demand for logistics space in Europe, secondary markets are becoming increasingly important for trans-European supply chains and progressively interesting for investors.

In the past five years, prime rents in Europe have continually grown in almost logistics regions, with Berlin and London now counting among the markets with the greatest pace of rent growth during this time. Berlin’s rapid development into one of Germany’s top logistics locations is especially remarkable when you look at rental growth, for example. In 2016, the prime rent in Berlin was only €4.90/square metre compared to €6.60/square metre in 2020. The large number of local consumers, the large low-cost workforce and the good supply of land up until recently are largely responsible for this remarkable transformation. Berlin also has a very good location as the crossroad between East and West.

Belfast, Budapest and Bratislava clearly stand out as other emerging secondary markets when judged by rental growth.

Brexit has no impact on London as the most expensive location

Five of Europe’s seven top regions in terms of prime rents are located outside the euro currency area. This is explained not least by the fact that the wage level is much higher in regions like Geneva or Oslo. The single-highest prime rents are paid in London and its submarket of Heathrow as a major hub of international logistics because massive demand coincides with very limited availability of accommodation or land and with high prices. Brexit and the coronavirus pandemic have actually exacerbated this trend.

Southern Europe in particular still has many affordable logistics locations available. Very strong growth rates can be expected here with these secondary markets also taking on a greater role in connection with growing demand for logistics space in Europe.

If you are under 16 and wish to give consent to optional services, you must ask your legal guardians for permission. We use cookies and other technologies on our website. Some of them are essential, while others help us to improve this website and your experience. Personal data may be processed (e.g. IP addresses), for example for personalized ads and content or ad and content measurement. You can find more information about the use of your data in our privacy policy. You can revoke or adjust your selection at any time under Settings. This is an overview of all cookies used on this website. You can either accept all categories at once or make a selection of cookies.