Hamburg / Hanover-Langenhagen, 12 November 2021 – The first cut of the spade has been made. With a symbolic act, construction work began now for an industrial park that Garbe Industrial Real Estate GmbH is developing in Hanover-Langenhagen. A state-of-the-art property with a total hall area of 15,500 square metres is being built in the immediate vicinity of the international airport. Completion is planned for May 2022. The investment volume amounts to 18 million euros. 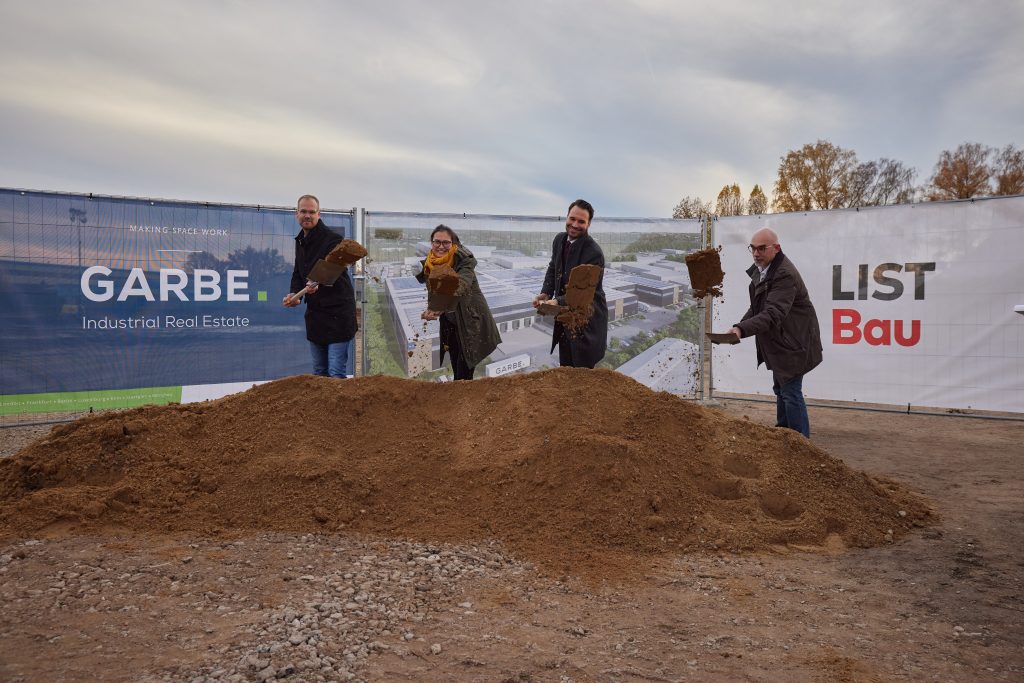 Small and medium-sized enterprises in particular are to be addressed with the project development. “They impress with their innovative strength and form the backbone of the German economy,” says Adrian Zellner, Member of the Executive Board and Head of Business Development at Garbe Industrial Real Estate. The Hamburg-based company has designed a new type of building for this target group: the Garbe IndustrialQuarter. The format is being implemented for the first time in Langenhagen.

The IndustrialQuarter is primarily characterised by a resource-saving construction method and an area key that can be flexibly tailored to the needs of the tenants. The property planned in Langenhagen consists of four hall sections of up to 4,200 square metres, which can be divided into units starting at around 1,800 square metres. Each unit includes office and social areas that total almost 1,000 square metres. In addition, each unit has ramps and floor-level sectional doors for loading and unloading trucks. “These small sizes make the Garbe IndustrialQuarter especially interesting for start-ups and expanding companies in the areas of last-mile logistics, wholesale, E‑Commerce and light industrial,” emphasises Adrian Zellner.

LIST Bau Nordhorn was commissioned with the construction as general contractor. “We look forward to working with Garbe again and building a modern logistics center within the next seven months. A lot of work has gone into the design of the facade, which visually stands out from the familiar look of a logistics hall with wooden elements and a strip of light,” reports Jens Schulte, Hamburg site manager at LIST Bau Nordhorn.

The property in Langenhagen is being built without any fixed rental commitments. “We are currently in talks with a number of potential tenants. Demand is big. This is not only due to the new type of building, but also to the excellent location,” explains Adrian Zellner. The IndustrialQuarter is being built on a 32,000 square metre plot of land in the “Am Pferdemarkt” industrial park. It is only one kilometer from the A 352 motorway. It connects the location with the airport, the A 2 Dortmund – Berlin and the A 7 Kassel – Hamburg motorways. The industrial park is connected to public transport. The closest bus stop is 100 metres away and the Langenhagen-Pferdemarkt S-Bahn station is 800 metres away.

The new building will be erected on a brownfield. “In order to create new settlement potential, we had the existing building demolished and have comprehensively revitalised the area,” says Adrian Zellner. The IndustrialQuarter is developed in such a way that it meets recognised ESG criteria. A photovoltaic system is installed on the roof to generate renewable energy. Skylight domes and a ribbon of windows extending around the entire building ensure more daylight inside the hall and reduce electricity consumption. The facade is partly designed with wooden elements. Garbe Industrial Real Estate is aiming for certification according to the gold standard of the German Sustainable Building Council for the property.

If you are under 16 and wish to give consent to optional services, you must ask your legal guardians for permission. We use cookies and other technologies on our website. Some of them are essential, while others help us to improve this website and your experience. Personal data may be processed (e.g. IP addresses), for example for personalized ads and content or ad and content measurement. You can find more information about the use of your data in our privacy policy. You can revoke or adjust your selection at any time under Settings. This is an overview of all cookies used on this website. You can either accept all categories at once or make a selection of cookies.